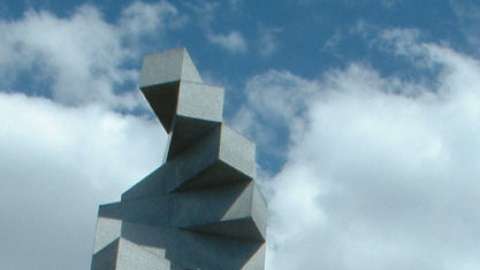 More pages in this section

'Bloch is one of the rare figures apropos of whom we can say: fundamentally, with regard to what really matters, he was right, he remains our contemporary, he may be belongs even more to our time than to his own.'
(Slavoj Žižek, The Privatization of Hope, 2013)

Born in 1885 in Ludwigshafen, by the time of his death in 1977, Ernst Bloch’s life had spanned the major events of the 20th century. Brought up as an assimilated Jew, he was confirmed as a Christian at the end of the 19th century but on the same day declared his lifelong commitment to atheism.

Intellectually precocious, Bloch was already publishing philosophical essays as a teenager. He studied at the universities of Munich and Würzburg and later became a member of the Simmel and Weber circles. As an engaged opponent of the First World War, he spent the period from 1914 to 1919 in exile in Switzerland. During the Weimar Republic, his commitment to Marxism and revolution placed him very high on the Nazi death list and in 1933, he was forced to emigrate to the USA where in 1959, he published Das Prinzip Hoffnung.

Bloch returned to East Germany in 1949 intending to help create the first socialist country on German soil, but soon found himself on the wrong side of the Communist authorities, for whom his unorthodox Hegelian and utopian views as well as his intellectual influence on the oppositional Harich group undermined the dogmatic orthodoxy of Stalinism. Finding himself on a lecture tour when the Berlin Wall went up, he gave up all hope for the GDR and stayed in the west. He was awarded an honorary chair in philosophy at Tübingen, where, in the 1960s and as a great friend of Rudi Dutschke, he had an influence on the radical student movement, which was attracted to his unorthodoxy and belief in the continuing relevance of hope, utopia, and the practice and theory of liberation.

In the period immediately following his death, Bloch sunk into obscurity, though his influence remained: Theodor Adorno, for example, cited the impact of Bloch’s Spirit of Utopia (1918) on all his own writing. Recent years have seen a growing interest in Bloch as questions of liberation and emancipation, hope, alternative futures and social, economic and cultural transformation have resurfaced and as, in European thought and beyond, postmodern descriptives are being rethought in a changed global cultural, intellectual, religious and political landscape.

Founded in 2007, the Centre for Ernst Bloch Studies has played an important role in the renaissance of interest in Bloch’s philosophy. Part-funded by a British Academy Research Development Award, the Centre has demonstrated the undisputed contribution Ernst Bloch made to continental, radical and Marxist philosophy in the 20th century and has acted as a catalyst for the noticeable growth in interest in his thought. The Centre’s immediate aim is to further explore the relevance of Bloch’s utopian philosophy for core areas of practical and theoretical philosophy as well as wider intellectual, social and cultural themes.

The Centre has hosted international conferences in 2009 and 2010, has organised the AHRC research network The Return of Religion as well as lectures, talks and seminars in conjunction with the German department at Sheffield University, where the Centre was based until transferring to the Institute of Modern Languages Research in 2016. It has funded a PhD project on materialism in the context of the contemporary revival of materialisms in the humanities.

The Centre’s members collectively head the Bloch Bibliothek project, which aims to provide a translation and commentary on Bloch’s collected work, and which involves a growing group of translators and scholars nationally and internationally. The outcomes will be a monograph series, published by Brill, and a digital platform.

The Centre is a partner of the Prokhorov Centre for the Study of Central and Eastern European Intellectual and Cultural History at Sheffield University, and has links with universities and research centres abroad (Bochum, Landau, Sydney, Tübingen) as well as the Ernst Bloch Archive in Ludwigshafen.